I know a lot of you have been quite eager to read about the specific Faction Playstyles of the four factions, and so in this article we will look at the strengths and weaknesses of each faction in turn.

From the outset I should point out that, in the longer term, the factions are designed to be flexible- I aim for each faction to have a number of different “viable” builds, so you really can play to your own strengths and tastes as a player.

I’d also like to explain that the below strengths and weaknesses are on average, rather than every model. The Artifacters are not particularly strong in Close Combat, but that doesn’t mean you want to get in to a close quarters fight with Sage and his Mattock! The Bondsmen are Close Combat specialists, but that doesn’t mean that none of them have decent ranged weaponry- to a degree, all factions are somewhat versatile, meaning that tabletop tactics, rather than list building, will have the final say in who wins.

That said, a cleverly built list will most certainly give you a helping hand! 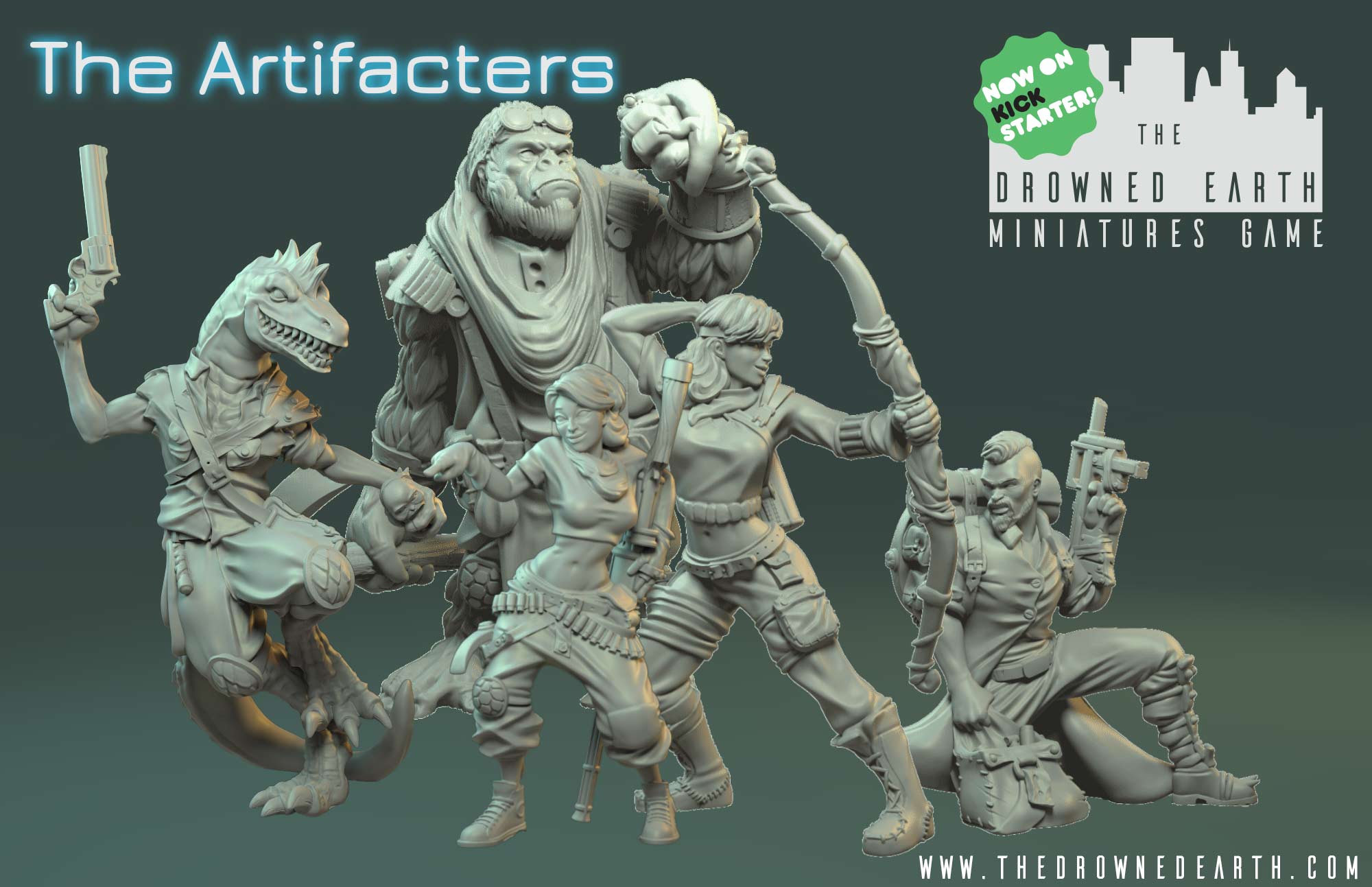 The Artifacters have higher than average movement, and good Agility, which is important for dynamic movement. They are good at dodging, and some models are harder to hit at particular ranges. Several of the Artifacters have an ability called “Run and Gun”, which, in the Active turn, allows a model to dodge 1″ after a successful ranged hit.

In The Drowned Earth leaders have a special ability, which confers a benefit on all the characters on her Crew (but not Mercs, Troops or Beasts). Nix is the leader of the Artifacters, and her special Leader Ability gives +1″ to all dodge movement, meaning that the Artifacters are particularly good at darting out of trouble and ensuring that an enemy doesn’t get a second shot!

The Artifacters have access to smoke and stealth, both useful for avoiding incoming damage while trying to claim objectives.

On the flip side, the Artifacters do not have great armour, and have weak damage output in Close Combat. Their ranged combat is average both in terms of damage output and range.

The Firm are good all rounders, meaning that their best strategy is to force a fight on their own terms- wherever the enemy is weakest. They are slower than the Artifacters, and not as agile, but their armour is stronger, and they are proficient in both close and ranged combat. Their damage output is excellent, and given a healthy boost by the Leader Ability of Kaneda, who ensures that each 9 or 10 result on an enemy’s armour roll will inflict two, not one, wound. 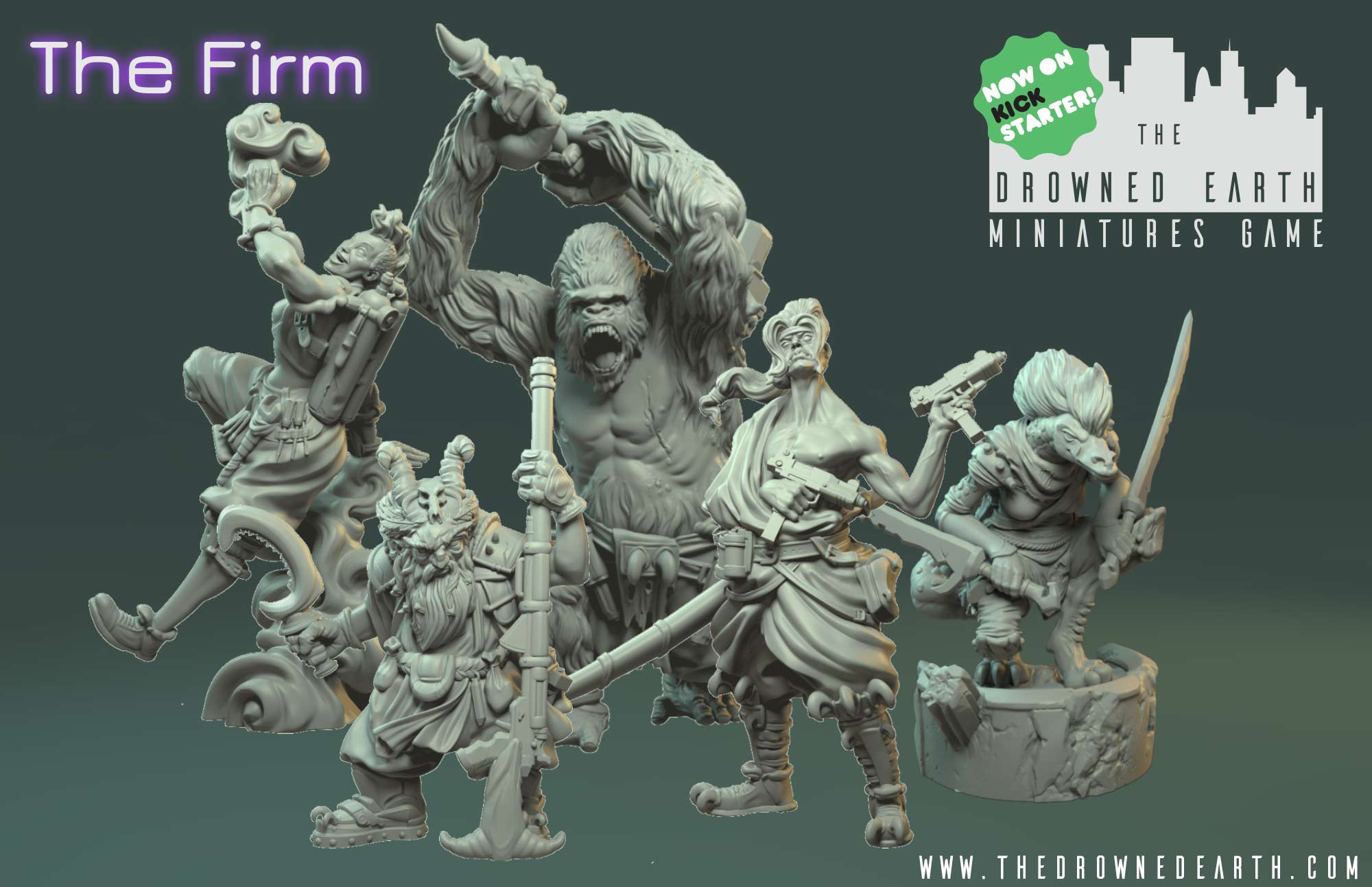 The Firm have access to flame and Stealth- flame being excellent for board control, as well as vicious damage output which can kill a model very quickly if used well. They also have access to the Stun ability via Lissz, who can creep out of the darkness and kill very efficiently indeed. The Firm are a reactive faction, who’s flexibility will benefit a clever player, but who’s general resilience will win out also.

The Militia are ranged specialists with excellent marksmanship, and efficient weapon ranges. In terms of raw firepower, no other faction can rival them. Their favourite strategy is to acquire good firing positions, and control the board while their specialists infiltrate and claim objectives under cover fire. 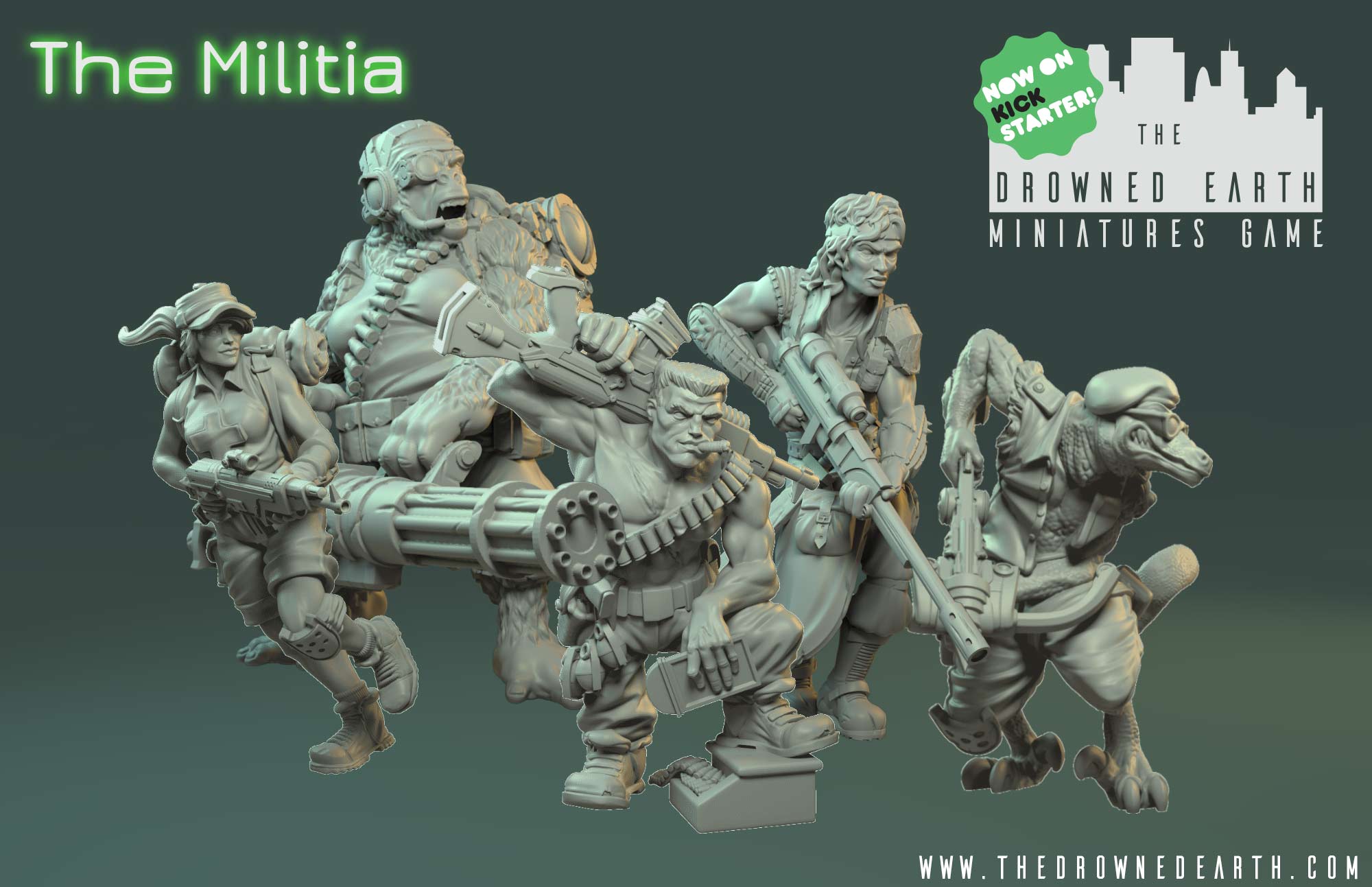 Their other strength is their organisational ability. All leaders have the “Command” skill, which enables them to move Action points between friendly models in Line of Sight, regardless of whether that model has acted or not this turn. This can be an excellent way to ensure AP’s are not wasted, or to set up a daring plan, or even to ensure a model in a critical position can react multiple times to an enemy push.

However, this ability is limited- A leader can command multiple times during their activation, however, the moment they fail a command roll they are done commanding for the remainder of the turn.

Forek however, may fail a single command check, and keep on commanding. He is only done after the second failed check. So the Militia’s play style can be summed up as follows:

They are average in Agility and speed, but like the Artifacters have slightly below average armour. They have access to explosive weaponry and stealth.

In the right circumstances, a fearsome Crew indeed. The Bondsmen are close combat specialists. Slow, perhaps even cumbersome in places, but heavily armoured and vicious in Close Combat. Rather than dodging and evading their way in to combat the Bondsmen rely on positioning, cover and their considerable armour to get them in to range. They also specialise in a number of unpleasant tactics- stun is a favourite, stripping a wounded enemy of an AP, ensuring that they will not be

able to react to your next strike. 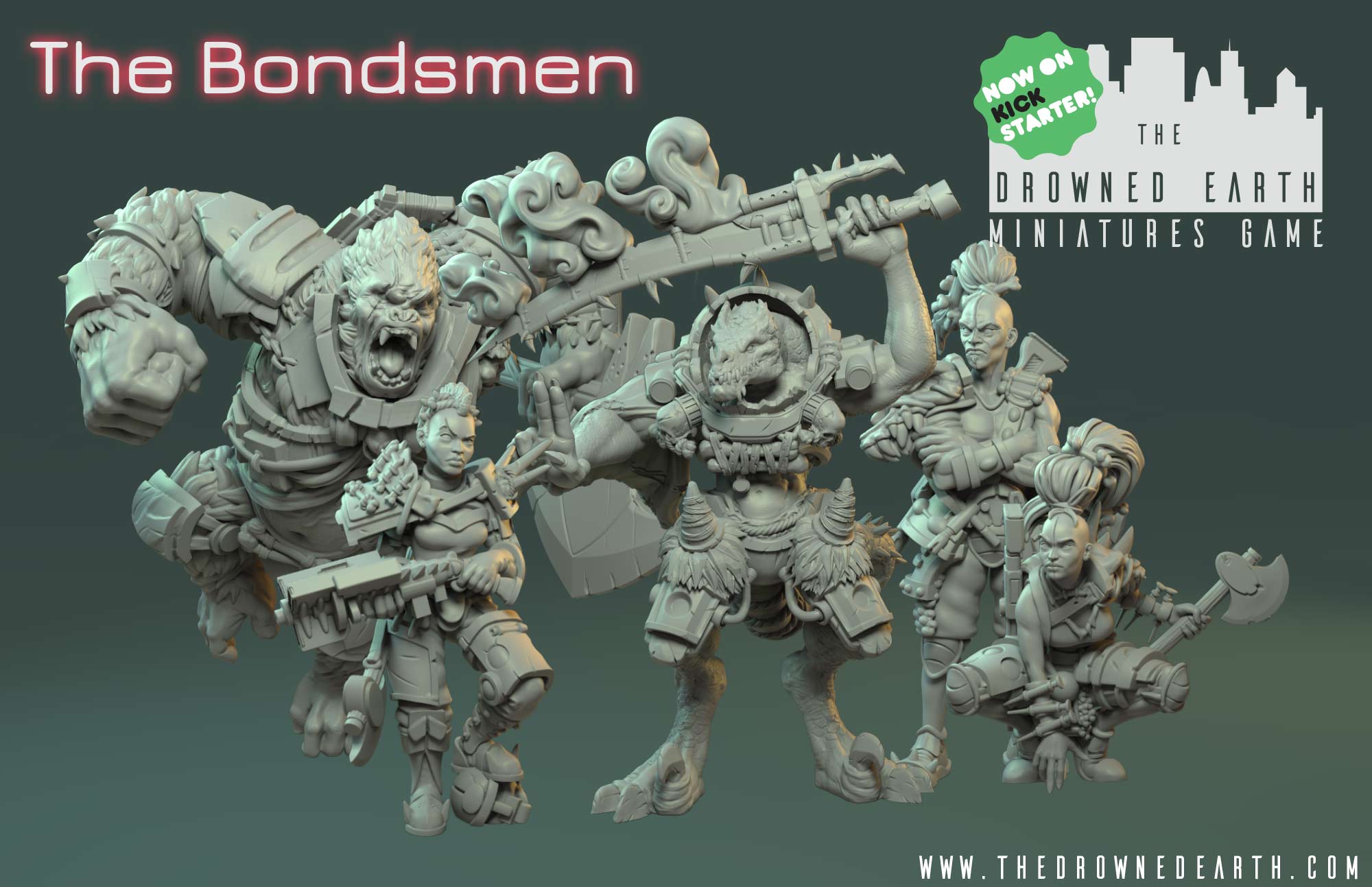 Limossk, the Bondsmen’s leader has a Leader Ability which can really add to the momentum of an onslaught- any time a Bondsman character under Limossk’s control reduces an enemy to 0 wounds that Bondsman instantly gains 1AP. If you’ve successfully worn down the enemy Crew and are now in their back field with a dangerous and mobile character like Fancagne this can result in a very brutal and very dramatic end to the game! The Bondsmen strategy can be summed up as follows:

The payoff is that they are slow, and not the most agile of factions. They lack range, although their ranged weaponry is still deadly when used correctly.

I should remind people that the above is based on the current, Beta version of the stats, which are subject to change when we re-balance them after the kickstarter. The basic character of the factions should remain as above, or perhaps even become more so than it is now.

These characteristic strategies are only the beginning. Each faction has a-typical characters, and with the addition of a Merc, or some well chosen Beast models new strategies can be devised. This will only improve as time goes on, and the range increases in size and diversity. My vision in the longer term is that each faction will have preferences towards certain tactics, and abilities which are rare outside their faction, or exclusively their own. It will however, be possible to build Crews in a number of different, tactically interesting ways.

Which faction sounds like your best fit? Let me know in the comments below!