Of course, quite a few hardcore TDE fans have all four factions, and were eager to pre-order the entire set, at a discount. I decided that the best way to reward those players was, not only to apply a discount to the full set, but release the pre-order as a “Scenario Pack”, with a multi-player scenario which involves all the models in the pre-order, and doesn’t require the rest of the factions to play. From now on this is going to be the modus operandi of the TDE release pre-orders: A scenario pack, with a special, exclusive scenario, which involves some or all of the models in the scenario, and can be played with 2-4 (or maybe, in the future, even more) players!

And these will be available after the pre-order too, albeit at full retail price without the pre-order discount, and probably in limited quantities. 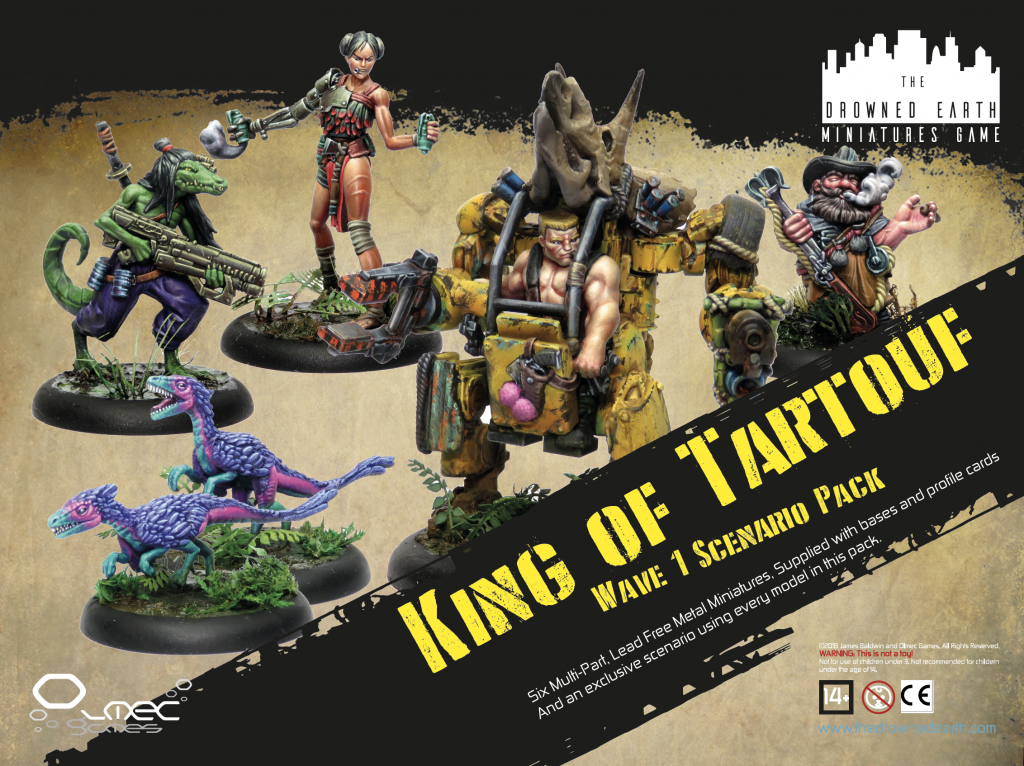 This time around we have the “King of Tartouf” scenario: Forek answers a call of nature, leaving his Load Lifter unattended. The fight is then on to steal it! As the name suggests it’s a King of the Hill style game for 2-4 players, and includes a Troodon balancing mechanic, and most importantly: exclusive multi-player rules for use with this scenario, or generally while playing TDE. Multi-player is crazy fun!

But of course, not everyone needs all 5 releases, and now the pre-orders are over, the individual releases are now available in the New Releases section of our store, HERE.

Probably at the top of the shopping list are the Troodons. At 6 points each, these are on par with the Domeheads in terms of points value. The same speed, more agile, but less resent to damage than their head butting colleagues, the Troodons have a base “Nailed It” damage of 4, with Sneaky(1) {+1CC when

unopposed). This means that they can more reliably deliver a killing blow (although they don’t knock down their opponent!). However, they have another trick up their sleeve. With the “Evade” skill a ranged attacker will always require a “Nailed It” result to hit them!

For my money, Troodons are more reliable as lone threats, while to get the best out of the Domeheads they are best used as part of a synergistic combo, utilising their resilience and knockdown ability to give their owning Crew an advantage in Close Combat, or to neutralise a reaction threat (models can’t “stand up” as a reaction, after all!).

Of course, as Beasts are faction neutral, The Troodon can be a valued part of any Crew, meaning that for players who have several different factions, these provide extra value! They can be taken at a maximum of 4 models, and come in packs of 2.

Ando brings several exciting things to the ever-popular Artefacters faction. Firstly, as another Scout, you’ll be able to double-infiltrate on scenarios which allow special deployment for models with the Infiltration Class Ability. Secondly, he brings some sorely needed Close Combat expertise to the faction. Sure, Sage is no push over, but with a maximum damage of 6 with Rend(1) and a Close Combat skill of 7, Ando is extraordinarily deadly at close quarters. The payoff is that his Pass Damage in Close Combat is somewhat lacklustre, although 3 with Rend(1) is still not to be sniffed at. The main drawback of the model is his lack of effectiveness beyond 8″. This point is mooted somewhat for an Infiltrator, but one can think of Ando as more of a board-control “threat bubble” than anything else. This is compounded by his awesome “Grapple” ability, where he can–during his Activation or as a Reaction–zip-line towards a big enemy, or drag a smaller one to him. In all, Ando is a model even Bondsmen should be nervous of allowing in to close quarters! 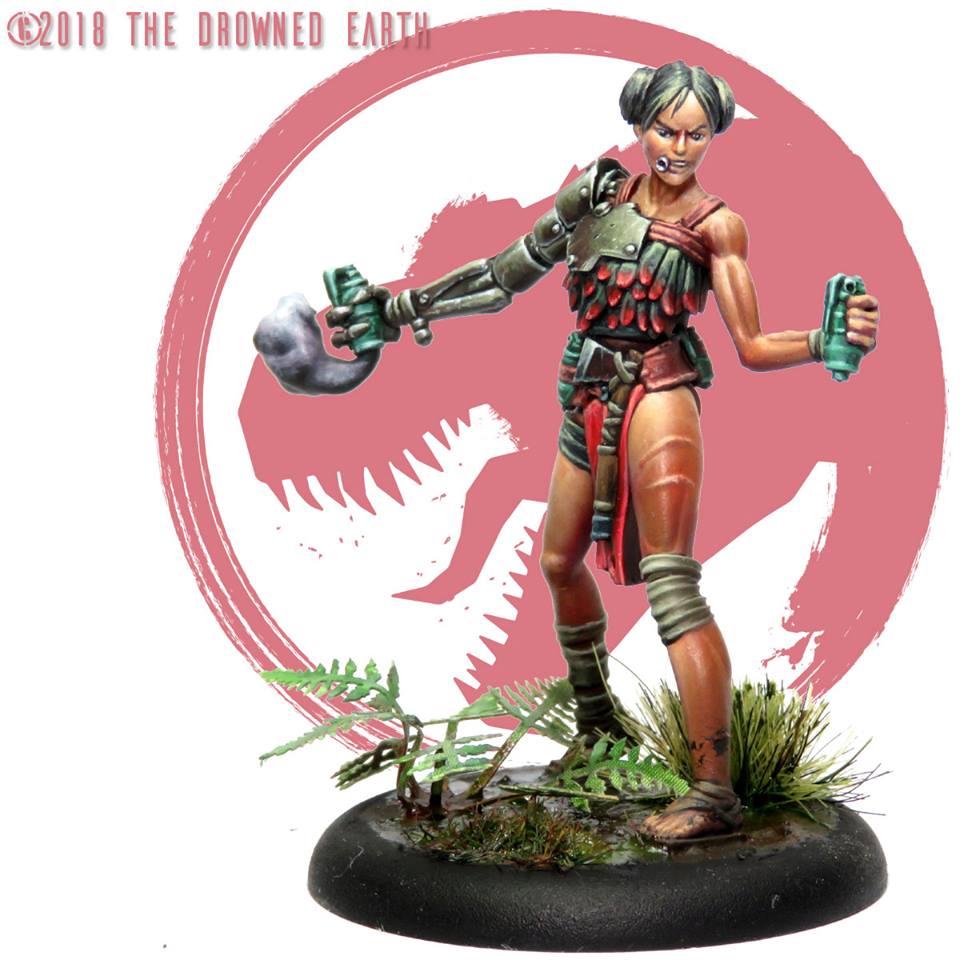 Speaking of the Bondsmen, like Ando, Ravanna brings them access to a tactic which is not typical for them: an agile model with stealth! Ravanna also has the Camouflaged skill, meaning she’s always -1 to hit, making her reveal from

Stealth particularly deadly. Like all Bondsmen she’s armed with an Axe and has Close Combat 7, but she’s armed with Quake Grenades, which use a large template, and has the Knockdown weapon Property. This means she can be used rather like a Domehead- knock down and injure a defender, softening them up for a killing charge. This is particularly effective with a Template weapon, as it means that other nearby models, who might usually be able to react, could be knocked prone to break line of sight with the target model. Of course this is only applicable if you’re using plenty of cover and scatter terrain, but you’ll know what I’m going to say about that already, right?!

Continuing the theme of utility models, designed to provide cover and distraction for the rest of their crew, Lakassk compliments the often squishy Firm perfectly. His Nova Cannon is long range, accurate, and uses a small template. The damage is low, but damage isn’t what Lakassk is about. The Nova Cannon fires Flash-bang grenades, which have the Blind property. This means Lakassk is ideal for out-sniping the sniper, and covering a Firm charge, or Objective Grab. Out-sniping the sniper sounds risky though, doesn’t it? Well, that’s why Lakassk also has Camouflage, ensuring his enemy is at -1 Marksmanship to hit, for a maximum of -3, if Lakassk is also benefiting from Hard and Soft cover. As always in TDE, positioning, and creating your firefights in advantageous positions, is the key to victory! However, with an Ancient Blade, and CC7, Lakassk is hardly a pushover in Close Combat either. 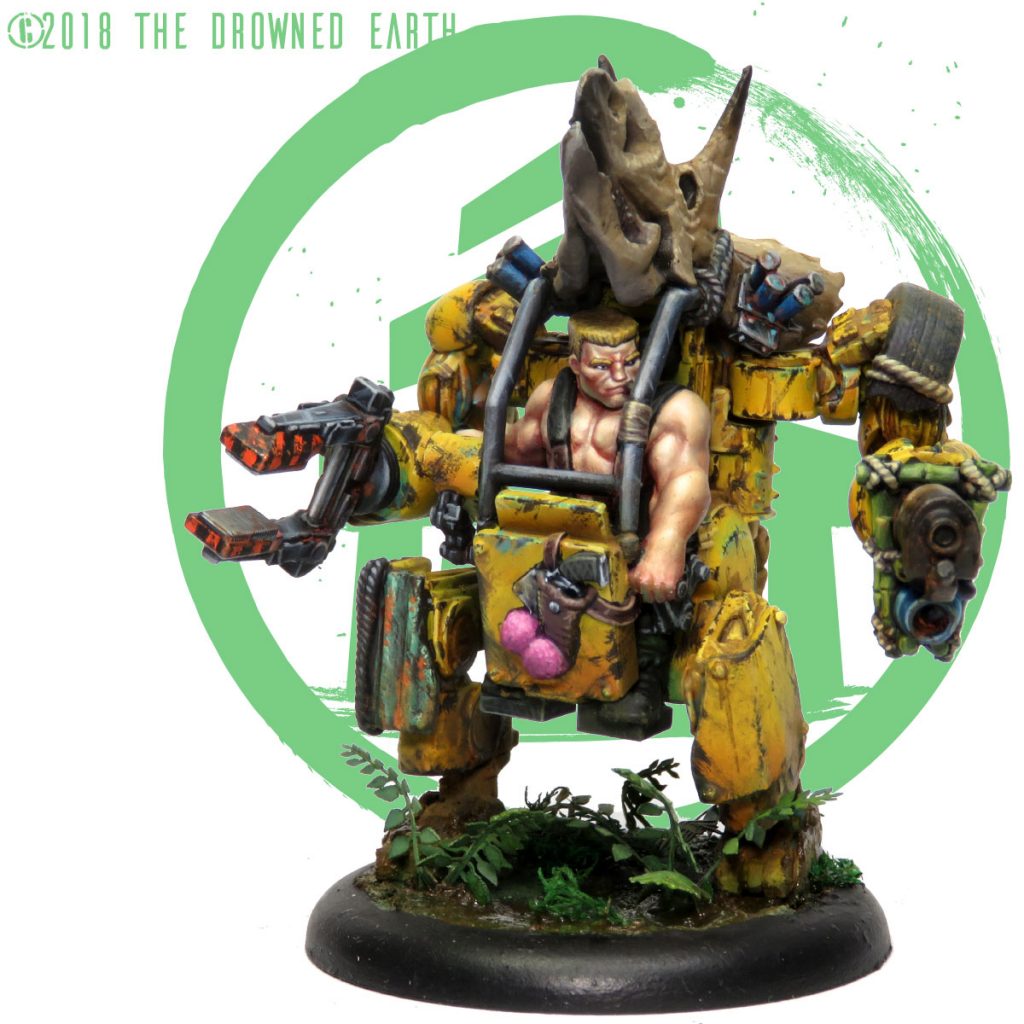 Lastly though, is perhaps the most anticipated model of Wave 1: Forek on a Load Lifter! So far, mounted leaders have all been on creatures, and this will be typical moving forward. However, that just isn’t Forek’s style, and so he rides around on an armoured power suit, salvaged and repaired from ancient technology. As a conveyance, the Load Lifter is slow but reliable, having an identical Pass and “Nailed It” movement value. The machine is slow and cumbersome, but takes no damage from falling, landing neatly on its heavy hydraulic suspension every time. However, it’s a payoff! The suit lacks the range Forek’s own weapon has, instead being armed with a deadly crushing “pincer” arm (3/6 Damage with Rend(2) and Pierce(2)- ouch!), and a flame throwing “inferno pack”. This means that Forek is exchanging ranged capability for Close Quarters deadliness. Having said that, as the core rules allow Mounted models to Mount and Dismount at whim (or at least, at the whim of the Action Points they possess), Forek can certainly have the best of both worlds. What’s more, the Load Lifter has some really hefty armour- Forek himself has Tougness 4 and Armour 2 while in the lifter (1 more than on foot- the machine provides him some protection, of course), but the Load Lifter itself is zero toughness with a whopping 7 armour, making Pierce completely useless against it.

Probably the best feature of the Load Lifter is how inexpensive it is compared to Forek on foot. It’s only an additional 11 points, meaning that Forek can get it somewhere useful on turn 1, dismount, use it as cover for the first few turns, and then hop in and wreck face in CC, when the time comes!

In all we’re very excited to be offering the Wave 1 models. Which are you most excited about?!!