With the upcoming release of a brand new faction for The Drowned Earth we are kicking off a series of articles about the gameplay of these piratical miscreants!

We will start off with a breakdown of the single models (that'll be parts 1 and 2) and follow up with a more general 3rd article about the faction as a whole, and perhaps even a little of what we might see in the future!

So lets start off with the Corsair Boxed Set leader, Jay!

He has a fairly standard, CC focused human stat-line. 4/6 movement, 4 wounds, 7 in CC and Agility, with marksmanship and intelligence 6.

Quite usefully he’s 4 toughness with no armour- meaning he’s effectively immune to Sunder.

His weapons are useful rather than remarkable- the Nova Pistol has a short range of 9/16 and the Blind property. His Blast-Sword is a standard 3/4 damage weapon with Sunder, but Reach(1) pushes it above the ordinary.

Jay really comes into his own when his Skills are considered, and he’s quite representative of the Corsairs generally.

When this Model Declares a Move in Water you may only draw Line of Sight to or from it at the start and end-point of its Movement Path. Additionally, Swimming counts as regular, not restricted, movement.

An extremely useful skill both in terms of its protective capabilities but also for mobility. Very piratical!

When an Enemy Model Charges this Model, after declaring Reactions, you may resolve a Dodge reaction using the attribute Die only, as though the Reaction was unopposed. Now, regardless of the outcome, resolve the Charge and Reaction as normal, remembering that Models without Reach may not damage Enemies who are not in Base to Base.

But Jay DOES have Reach… So in effect he can react with Close Combat versus a charge, then step back, making it impossible for any other model without Reach to wound him. Meanwhile he’s still able to inflict damage should he win the combat. Sure, it’s expensive (the Dodge Reaction isn’t listed as free) but he’s a 70% favourite to successfully dodge!

Additionally he could forgo the option to react with Close Combat and just spend an AP on the dodge reaction to avoid damage.

All in all, charging Jay without Reach doesn’t seem that appealing, does it?

Jay’s signature Leader Card is the once-per-game Aquatic Advance. Effectively he can grant a stealth token to any friendly, swimming model who has the Submerge skill. So at the time of writing that would be himself, Noalla, Uxhi and the Deck Hands… with Matt to follow when released. Ouch! That’s a lot of stealthed models.

We will save the non-signature Leader Card for the general Corsairs discussion, but for now I think it’s fair to say that at 22 points Jay is a very solid leader option. He may not be the best at commanding, and his damage output is somewhat limited, but the mobility, tricks and defensive tactics he brings to the table make him a tricksy opponent in a tricksy faction. 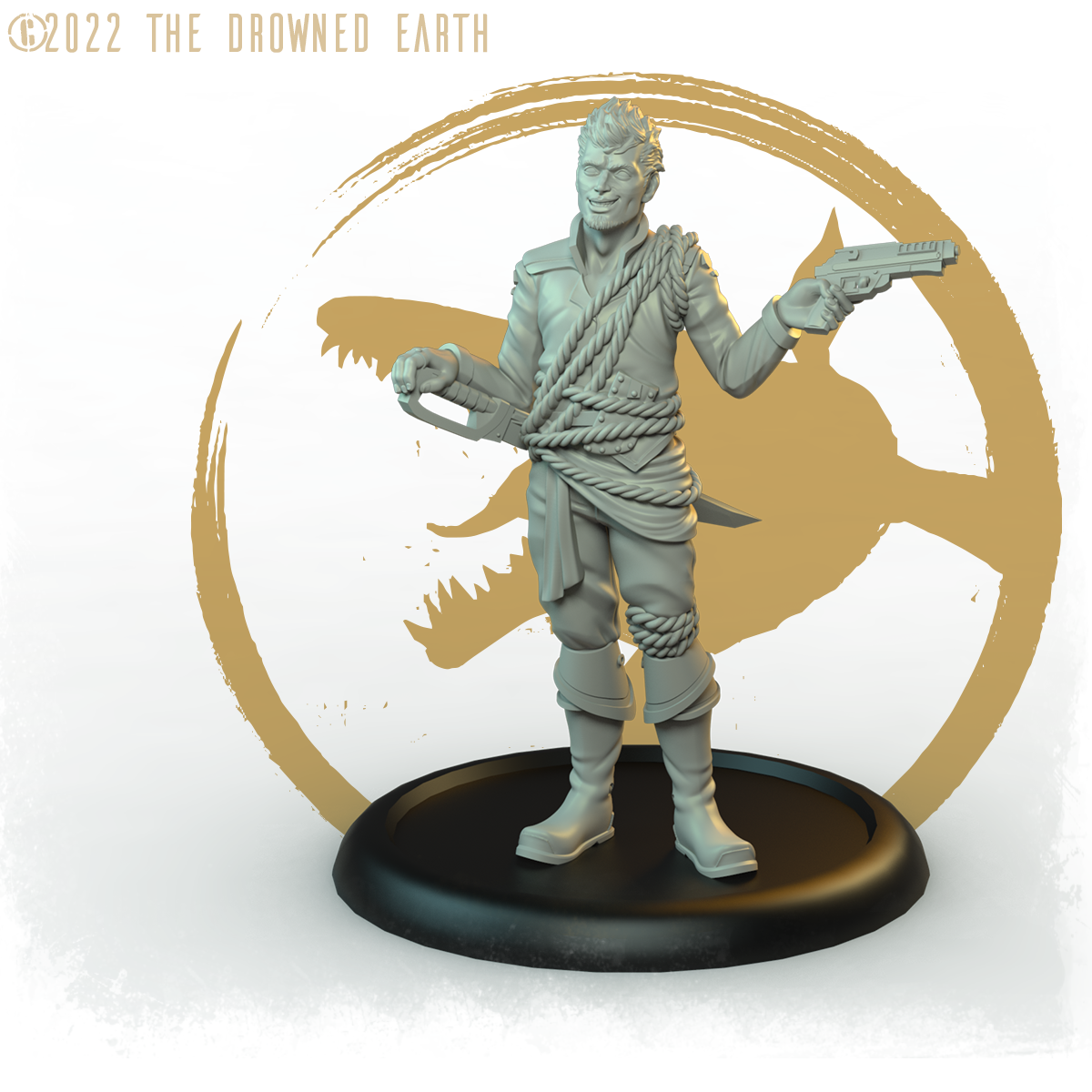 Next in our Corsairs Spotlight is the hilarious Mr Jibb.

Wearing an abandoned Crab-bot on his back Jibb is heavily armoured (toughness 2 and armour(4)) but with just 3 wounds. He moves a standard 4/6 but can only “bank” 4 AP. We shall see why soon!

His stats are mostly sixes but the cumbersome robot remains he wears as armour reduce his agility to a 5, meaning you’ll waste a lot of AP trying to get him to complicated positions.

He’s the faction Mech, and so the lower agility is a problem. However, with Reach(2) and Sunder(3) you don’t want to get anywhere near his crab-claw! This coupled with the fact that he also has Footwork (see the Jay article for charging-shenanigans) means he’s another model you really don’t want to charge. Sorry Bondsmen!

The Crab-Cannon has a fairly long pass range of 11 but a maximum range of just 15. As well as inflicting 2/3 damage it also has slow(2/2), making Jibb a great board-control piece.

However, he really comes into his own when you consider the Auto-turret skill. Effectively Jibb can react infinitely, for free, but only using the Attribute dice (so a maximum range of 11” with a base 60% chance of success, and a maximum damage of 2).

This means that, although he is difficult to manoeuvre, when you get him in the right spot he is a problem which simply has to be dealt with…. and with the aforementioned armour(4) and toughness 2 he’s quite resilient!

At 19 points he’s not the cheapest model in the game, but I’ve found it hard to resist the temptation of putting him in most Corsair lists I’ve piloted.

That's all till next time folks! If you simply can't wait you can pre-order the Corsairs HERE 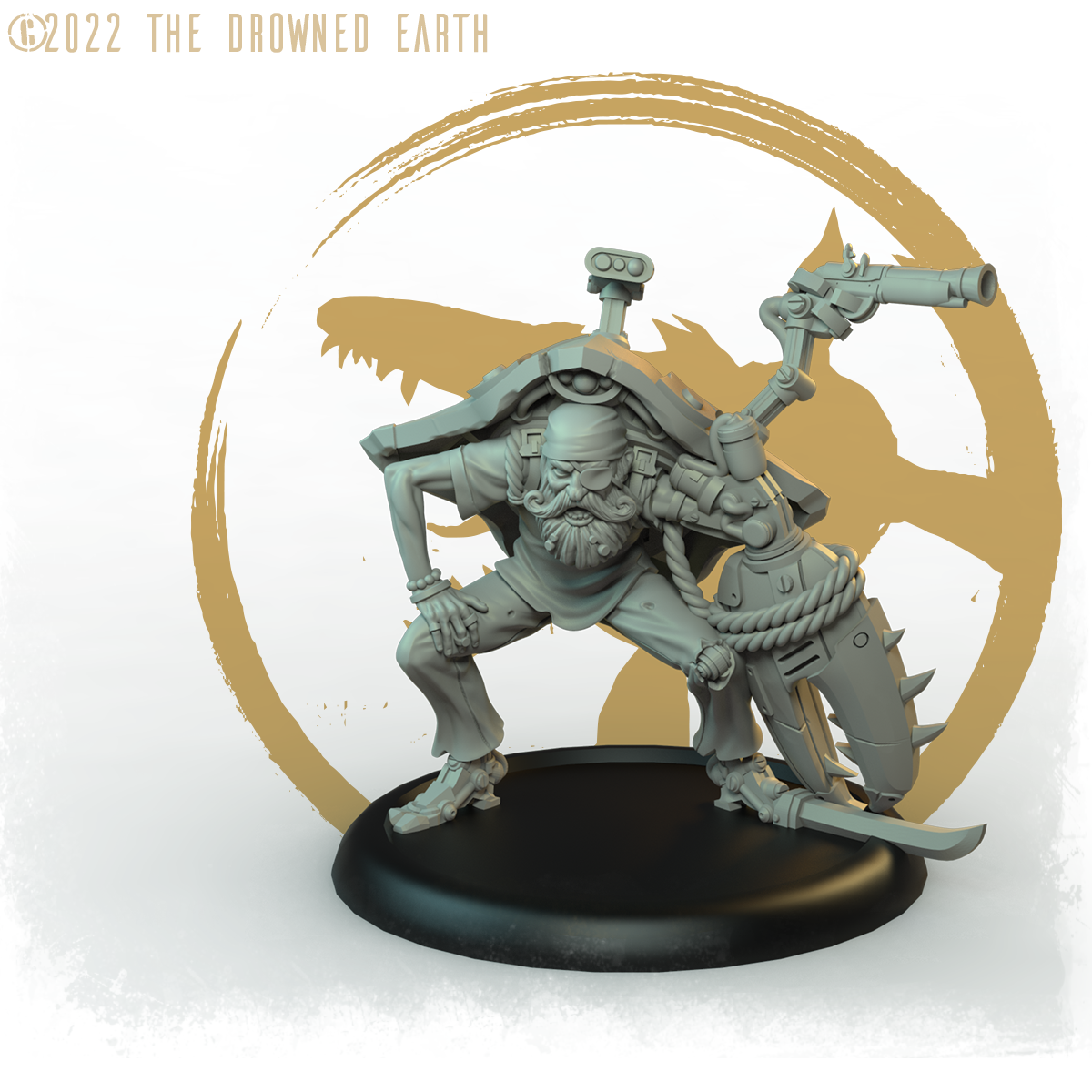