The Arch-Dean emanated an atmosphere of disapproval so extreme, the Esoterica senior staff were almost choking on it. His gaze pointed sharply down the angle of his aquiline nose, towards a plinth, atop which was a suitcase sized absence of dust. In its centre, a tiny origami Yuttaraptor.

“Yes thank you, Agriculture” the Dean snapped, so irritated at the obvious statement he refused even to look at the Chair of Pre-Fall Agriculture Studies.

“Would someone please do me the courtesy of explaining of how he got in to a high security vault, in the middle of the day, with two guards stationed at the only entrance?”

“Well it’s a bit of a mystery, isn’t it Arch Dean”, chimed in the Emeritius Professor of Electromechanical Thought Engineering, an air of cheeriness which spoke of his inability to read the mood of a room.

“Yes… It is…” said the Arch-Dean, through gritted teeth.

“What do you think he wants with it Arch-Dean?”

Wade Heyron, rogue Artefacter, pirate, and former Raptor-Whisperer, was probably the most famed Cat Burglar in Northern Ulaya. He was wanted by the Firm for blowing up a ship full of Gaea-Milk (a powerful narcotic), despised by the Artefacters for riding rough-shod over their code of conduct, before being expelled, and was hated by pretty much everyone else for his numerous antics over the last decade or so.

And now he had stolen an important artefact from the Tartouf Esoterica. Research on the P.O.T.C.H device had begun in earnest the year before, but was highly secretive. The Device was a suitcase sized control device, in an excellent state of preservation. The theory was that it controlled one of the many Pre-Fall satellites which still orbited The Drowned Earth. Research in to the device (and an effort to get it working again!) had only just begun, and was a matter of considerable secrecy.

“Call in all the Crews…. we must retrieve the device as soon as possible!”

The Story So Far

You have been hired to chase down Wade Heyron, and retrieve the device. After initial investigations you tracked down his route to a small Archipelago of islands. Your informant tells you that Heyron buried his treasure on one of the islands there, but she could not tell you which… You will have to search, but you are not alone. In their desperation to retrieve the device, the Esoterica have employed four rival groups to retrieve the P.O.T.C.H device, with a hefty bonus for whoever returns it to them.

The campaign will be played over five rounds, and your objective is to search the islands, discover the POTCH device, and get out without anyone stealing it from you! Each Round we will eliminate two islands from the search (but not the campaign- more on that later). In round 4, only one island will be left. Then, the faction with the most Victories on that island throughout the campaign will discover the device!

Then, in round 5, everyone will try to steal it from them…

So, lets dive a little deeper. 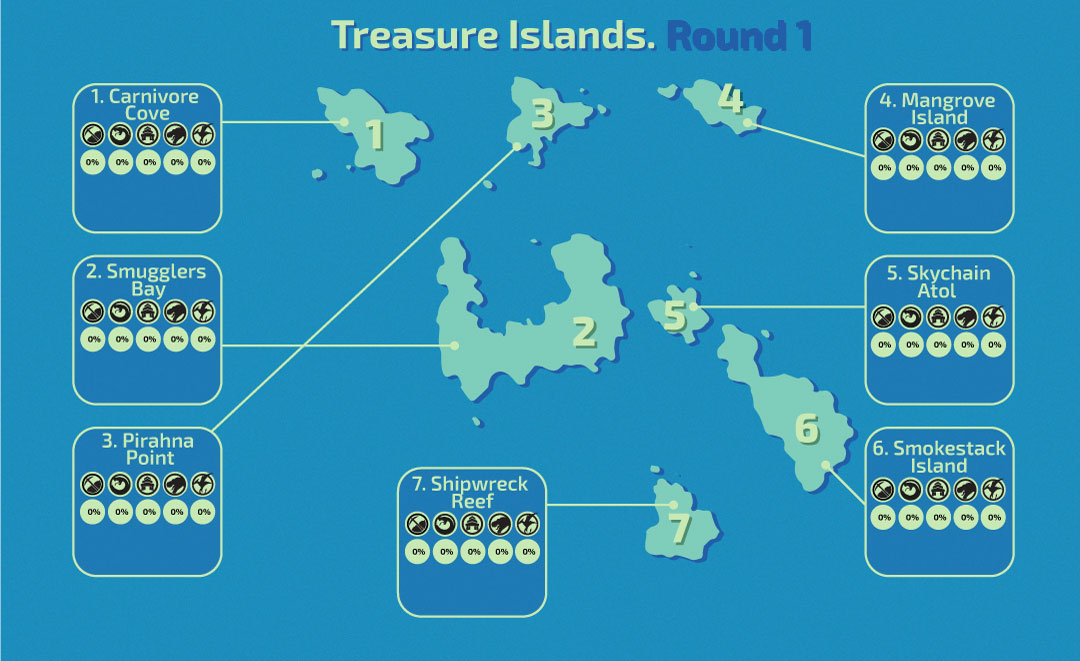 Each round you may play up to two games on two different islands of your choice. Each victory represents a little more of that island you have searched.

The islands have different special rules- Most of these rules are described on the Map Key, but some are referenced in the “Alternate Rules” chapter of the Hardback rulebook. If you’re playing from the PDF, you can skip these, or you and your opponent can decide on a house rule. 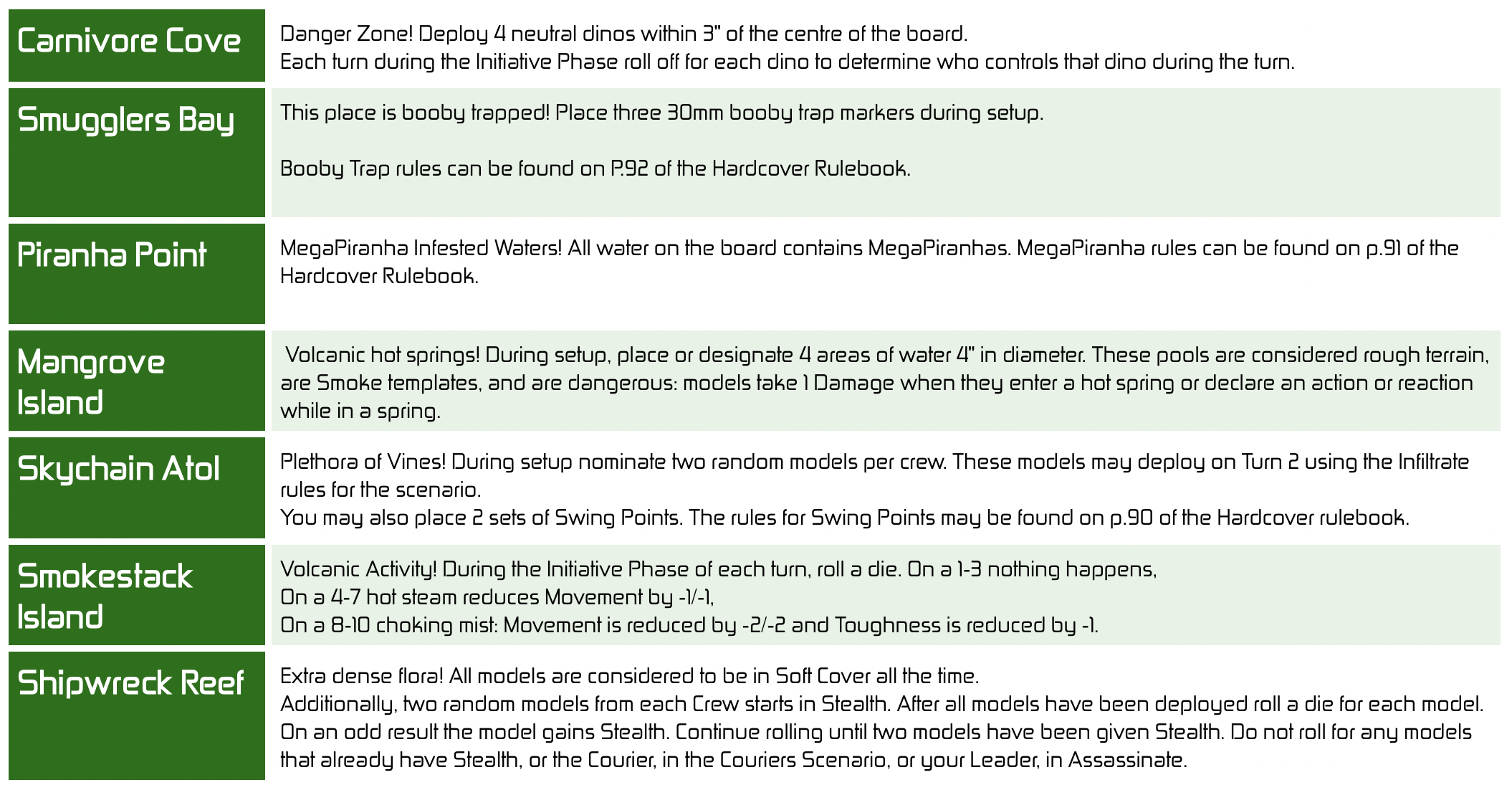 Each round, the two most searched islands become “fully searched”: the POTCH device will not be found there. However, the top two Factions of each Fully Searched Island will gain a special bonus. Ownership of each Island may change, round to round.

So even the islands which have been fully searched are worth playing for, to gain their bonus or even to deny the advantage to someone else!

In Round 4, we will be left with a single island, and all factions will concentrate on searching it. At the end of round 4 the Faction with the highest Search Total on that Island will find the POTCH device.

But it’s still not over…

Get to the Chopper!

Or boat, in this case… Now, the Faction with the Device must escape the island, while the other factions are racing to catch up with them. The Win/Loss record of the entire campaign will now determine where each faction starts, and how quickly they will be able to escape (in the case of the Faction with the Device), or catch up and steal the Device (in the case of all other factions!). Each win in Round 5 moves your faction closer to their goal!

In round 1 we will be playing Grudge Match! It starts today, and ends on December 22nd. So, who's in? Which islands look the most interesting? What faction are you joining?!